'DEAR ALICE' is a transcript of letters sent by my husband, Ian's grandfather, Ken Hague, from Yorkshire, England, to his wife Alice, during the Boer War and WW1.The letters, mostly written on odd pieces of paper and in pencil (which had faded in parts), where given to me by my husband's mother, Ken's daughter, to look after, as I am the 'Historical' one in the family.

I decided that rather than just leaving them in a tin to be forgotten, I would transcribe the letters and put them into a book, as a Historical Diary for our ancestors. It took me many years transcribing on and off but eventually I had a book.

In it, Ken writes of the deprivation and the terrible conditions he suffered during this terrible time. Of how he is freezing cold and up to his knees in horrible muddy water, and with holes in his boots and socks. He constantly asks Alice for news from home, cigarettes and food, most of which never reached him. Unfortunately, the Censor's pen made sure that no strategic details of Ken's Battalion, a Yorkshire Regiment, were written about.

In this book there are pictures of Ken's actual letters and 'Quick Fire Cards' to Alice, along with photos and the telegrams Alice received. To find out what happened to Ken and Alice and their 4 girls, do get a copy of this fascinating book.

It is a wonderful piece of real  historical evidence of life for a Soldier in The Great War.

Here are some Reader reviews: 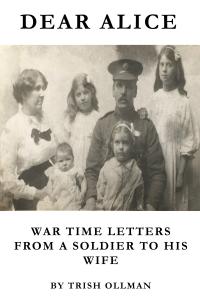